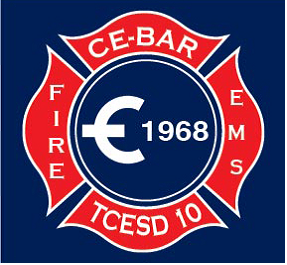 The name CE-Bar comes from the original CE-Bar Ranch owned by Charles Duffy. The ranch was located in the Austin Lake Estates, Lakeridge and Tumbleweed areas. An earlier name had been proposed by Tex Knolle, however, a majority of the other firefighters decided that CE-Bar would be better.

The first CE-Bar fire apparatus was a 1928 American Lafrance pumper, which was purchased from the Lockhart Fire Department for $200. This money was raised by pledges from local residents. A. J. Sanford, Hobby Massey and Bill Ogden went to Lockhart on a Sunday, picked up the truck and then went to the waterfront to show it off to all the neighbors. Other early firefighting equipment was shovels, wet tow sacks and most any other thing that could be used to fight brush fires.

No formal mutual aid agreements were in place during the early days of the fire department, and relations are remembered as being “cordial”.

The start of the fire department was remembered to be on the 4th of July, 1966 when Strawberry Sanford pounded on Tex Knolle’s door and stated” We’ve got to have us some fire protection”. Other fond memories include team competitions during training sessions where they actually went through hookups and spraying water, which were timed by the training officer.

Galen Simmons donated the lot on which the first fire station was located. This donation was made through the Travis County Water Control & Improvement District #18.

Charlie Petterson sat on the water district board that made the donation. Lots of neighbors donated their services to construct the first building.

Jean Ogden – I was coming home with my son Bill. There was a grass fire at Commons Ford and Cuernavaca. Bill insisted I let him out to fight the fire with a blanket we had in the car (Bill was 13-14 years old at this time). I left him to go get help.

Stopped at the Maverick Market. Galen Simmons was there alone and could not leave store. Went to club at lakefront to try and get help. No one was interested. I went back to the fire, which was then out. Decided then and there that we had to organize.

Charlie Petterson – Several come to mind, the first being a house fire on Lisa Drive on a very cold winter night. It was cold enough to freeze the water that ran off Didn’t save much of the house, but kept it from spreading. Another fire I recall was the burning of the old Maverick Market. We were hampered by the lack of water. The fire was intense and the building roof had not been vented. I volunteered to go up on the roof with a pickaxe to do the venting. Myself and others were concerned about the roof caving in due to weakened walls. After getting on the roof, I pulled up a ladder to place on the roof to distribute the weight. It worked.

Funding for early operations came from contributions, fundraisers and auctions. Later, another plan was developed to add a few dollars to everyone’s water bill that was payable to the Y.F.D. This too was voluntary, because a resident could have the charge for the

V.F.D. removed from their bill. A local artist, Harlan Winters, donated a bronze roadrunner (beautiful) to our V.F.D., with auction chances sold and a drawing held at a later date. Donations of$10 per household were solicited for the purchase of trucks and hoses.

The truck was stored in A.J. Sanford’s carport and later in Don Nelson’s garage. Training meetings were often held at the Nelson residence or in the streets between the two houses. Training was conducted locally, as no other training was known to be available.

The only station is and has been located at 2302 San Juan Drive. Duties and Responsibilities:

Charlie Petterson – I was appointed (or elected) to a group to put together a set of by-laws for the V.F.D. I served as a Director of the Fire District. I was appointed by County Commissioner Pam Reed. I held various posts within the fire fighter group up to Lieutenant on a truck. I now consider myself inactive but still interested and available to the V.F.D.

Tex Knolle – No rank. Duties were to fight fires with whatever we had to work with-often a tank truck and singed boots. Not to be forgotten: Harlan Winter, Joe Campbell, Galen Simmons and ??? Baker.

In an emergency, members were notified numerous ways: volunteers either heard the siren then mounted on a tall pole at the fire station which was activated by a first responder and call in, or they would be called by the volunteer telephone network, or they would just head for the smoke.

A.J. “Strawberry” Sanford was the first Fire Chief, with assistants of Don Nelson and Sandy Sanford. Sandy and Janie Sanford had close connections with running the V.F.D.

The V.F.D. also had a women’s group that trained to help fight fires during the day while most men were at work. Some names (but not all) were: Janie Sanford, Jean Wheeless, Ollene Petterson, & Kathy Teasdale. Bill Teasdale was a Fire Chief at one time. Harlan Winters took most of the daytime fire calls since he worked at home.